Political vision and leadership is needed to help the world out of the current economic impasse, panelists agreed at a BBC debate organized as part of the IMF–World Bank Annual Meetings.

During a broadcast live from the IMF’s headquarters in Washington D.C., the BBC’s Nik Gowing led a discussion on the state of the global economy in front of a packed audience of meetings delegates and IMF staff, many of whom were watching on a balcony on the upper floors of the building as the debate unfolded below them in the light-filled atrium.

The lively debate was watched by millions around the world

As the debate got under way, millions of viewers from all over the world had their say via Facebook and Twitter.

The IMF’s Christine Lagarde set the tone by warning again that the world economy has entered a dangerous phase. “But there is a path for recovery” she said. “That path is not as wide as in 2008, it is narrower. But if there is a collective will, a collective drive, to actually take that path and apply the remedies and the set of policies that we see, there is hope for the future.”

The IMF is forecasting a slowdown in the global recovery, with world growth projected at 4 percent in both 2011 and 2012, down from over 5 percent in 2010. Global activity has weakened and become more uneven, confidence has fallen sharply recently, and downside risks are growing, the IMF warned in its World Economic Outlook.

Panelists discuss the state of the world economy at BBC Global Debate that was broadcast live from the IMF’s headquarters in Washington, DC.

Mohammed El-Erian, CEO of the world’s largest investment corporation PIMCO, confessed to being “somewhere between worried and scared” about the state of the world economy. “There are three crises coming together: a growth and unemployment crisis, a sovereign debt crisis, and a banking crisis,” he said.

“I really hope that in the United States, in the international sphere, we don’t lose sight of the most important thing: that we have got to grow again,” said Austan Goolsbee of the University of Chicago. Goolsbee was until recently Chairman of the Council of Economic Advisors, which advises President Obama on economic policy.

The most serious crisis of confidence continues to affect the euro area, where negotiations between the Greek government and its international partners―the European Commission, the European Central Bank, and the IMF―over the release of the next tranche of financial support are ongoing.

Olli Rehn, EU Commissioner for Economic and Monetary Affairs, acknowledged that growth in the euro area is stalling and that Europe’s policymakers need to address doubts about their ability to overcome the crisis in the euro area periphery. “We have to tackle the root causes of our problems related to the uncertainty in the financial markets,” he said.

Many countries, including Greece, Spain, and Italy have taken important steps to bring down their fiscal deficits, Rehn said. Euro area governments are also seeking parliamentary approval for the strengthening of the European Financial Stability Facility that was agreed by euro area leaders on June 21.

But Goolsbee warned against thinking that austerity was the only answer. “There is a growing narrative in Europe that it is all about fiscal profligacy. They spend too much in southern Europe and they just need to cut,” he said.

Patchy recovery in the United States

In the United States, the problems are not quite as severe, although the economy clearly has slowed down. The challenge for the United States is to come up with a new growth model that does not rely on excessive consumer spending. The U.S. has to become more about exports and manufacturing, Goolsbee said.

El-Erian noted that while the official unemployment rate in the U.S. stands at 9 percent, almost 20 percent of the population is either unemployed or underemployed. This is a very serious issue. You need structural measures to get housing markets, credit markets, and labor markets moving again, he said.

From the audience, Sharan Burrow of the International Trade Union Confederation called on policymakers to fix the real problem of the global economy: the lack of jobs. “We need demand, and that’s about people.”

But for jobs to be created, firms need to feel confident about investing. For that, they need financing. That’s why it’s so important for bank balance sheets to be strengthened, Lagarde said.

Tectonic shift in the world economy

The panelists agreed that the world economy is undergoing a significant structural transformation. “We are going through a tectonic shift, not a cyclical phase,” El-Erian said. Because of that, it is important for politicians to have a vision so that they can convince their citizens they have a destination in mind. “So far, neither Europe nor the U.S. has offered a destination,” he said.

Lagarde said structural changes are taking place, with economic power shifting to emerging market and developing countries. This process has lifted millions of people out of poverty, she said. The challenge is to accommodate the restructuring of the world economy in a way that will allow advanced countries to cope with the current slowdown. 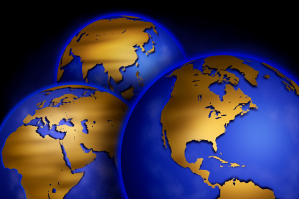 “As far as conducting, all I can do is roll up my sleeves,” Lagarde said in response. “The roadmap we can provide. The credit for it, the politicians will want to have. And that’s fine. I don’t want to be a conductor, but I’m very pleased to be a facilitator.”