VIDEO REPORT: World Population now at 7 billion INFO-GRAPHIC: The TOP 6 Nations with the most Elderly Dependents 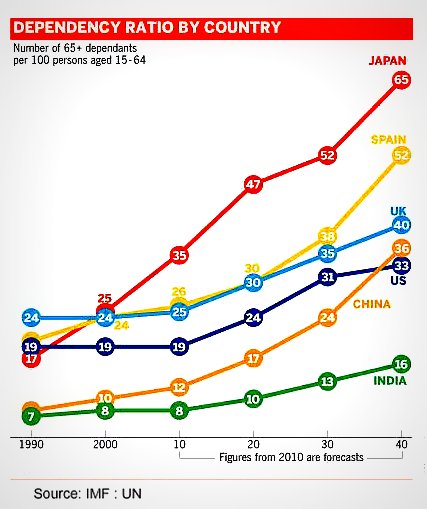 The International Monetary Fund tracks demographic trends around the world. One troubling trend is the rapid aging of populations in many countries. As you can see, Japan is leading the pack in terms of the number of elderly folks (65+) compared to younger people. Given the demographic trend in Japan, which had fewer births than deaths last year, that is unlikely to change.If you follow the lines on the chart above, all of the countries shown are projected to age over time.

However, some countries — such as Japan and Spain — are projected to age at a very rapid rate. The U.S. rate has been level for some time. It is projected to go up as well, but not nearly as rapidly as Japan, China or Spain. It is important to point out though that a big part of the U.S.’s economic growth over the past 200 + years has largely been due to maintaining a Pro-immigration policy and welcoming people from other countries while continuing to grow it’s own population at home — the old fashioned way.

Also, it’s important to remember that population growth and economic vitality are two sides of the same coin. Those who predict enormous economic growth and increasing geopolitical power for a given country should consider the implications of these statistics because, in many ways, demographic trends create their own destiny.