Afghan Military will Receive $4B a Year in Foreign Aid

The West will subsidize Afghan security forces by more than $4 billion a year after U.S.-led troops leave in 2014, President Hamid Karzai said Thursday, implicitly accepting a cut in the planned size of his military.

Western officials told AFP that no final agreements had been reached on funding or on the size of Afghanistan‘s security forces after combat troops in NATO‘s U.S.-led International Security Assistance Force withdraw.

But Karzai told a graduation ceremony at a military academy in Kabul: “It’s set that post 2014, for the next 10 years until 2024, the international community, with the U.S. in the lead and followed by Europe and other countries, will pay Afghanistan security forces $4.1 billion annually.”

It would cover both the army and “other armed forces,” he said, adding: “We agree and thank them.”

Karzai’s Western allies in the war against Taliban insurgents want to avoid the country descending into civil war after they leave.

But while NATO officials have long projected future Afghan forces at 352,000 men, the United States recently circulated a proposal for a total strength of 230,000, and Western officials say the $4.1 billion cost is based on that figure.

It is a fraction of current Western spending on the war. The 10-year conflict has cost the United States, alone, more than $444 billion.

But Afghan defense officials have expressed concerns over whether security forces 230,000 strong would be adequate.

The defense minister, Gen. Abdul Rahim Wardak, reportedly warned that if it was not based on “realities on the ground” it could be a “disaster,” “putting at risk all that we have accomplished together with so much sacrifice in blood and treasure.”

Following Karzai’s speech, a Western official stressed that the numbers were part of a model being discussed in the run-up to the NATO summit in Chicago in May, nothing had been decided and “everything is conditions based.”

“This is part of an ongoing discussion between coalition planners and our Afghan allies and will continue in Chicago and beyond,” he said, adding that under the concept Kabul would contribute $500 million to the $4.1 billion. 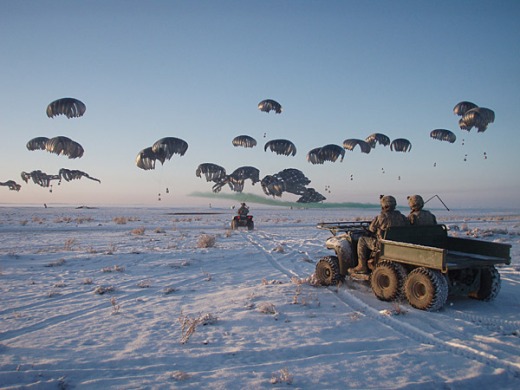 U.S. Soldiers watch as bundles of fuel and supplies are dropped into their landing zone. The supplies were delivered to them by the U.S. Air Force.

“The number of Afghan forces will basically come to a peak later this year” and should then reduce, he said.

But a diplomat from another coalition country said the cut in numbers could “create a monster,” alleging that the U.S. plan was driven by cost-cutting considerations rather than military effectiveness.

Even so, some coalition members were as yet unwilling to pay their projected share of the money, he added.

Questions remain over the funding deal, said Karzai, with Kabul wanting to be able to spend the money on requirements other than salaries, such as weapons purchases.

“Afghanistan will be able to pay the salaries itself one day … but Afghanistan needs radar, air defense systems, warplanes, transport planes, helicopters and other equipment that improves the defense system,” he said.

“If NATO or America will not give us planes, will they prevent us using this money to buy planes for our air force from other countries? If we were to buy planes from India or Russia or Iran or Pakistan or Ukraine, will our [forces’] salaries still be paid from the NATO money?”

Kabul and Washington have a frequently strained relationship, and are currently negotiating a long-term strategic partnership agreement to establish their relationship after 2014.

They are also in continuing talks over a memorandum of understanding on special operations, a U.S. Embassy spokesman said.

Karzai has long objected to night raids, which are unpopular among ordinary Afghans but which coalition military commanders argue are among their most effective tactics against the Taliban.